Autonomous vehicles, once relegated to works of science fiction and, more recently, among the technologies that “weren’t quite there yet”, are actually becoming a much more common sight – and not just on the test tracks used by large auto manufacturers. Autonomous, self-driving vehicles are quickly making themselves a fixture of the smart factory floor in a way that is revolutionizing operations. Much like the collaborative robots that many manufacturers are leveraging to improve safety and performance in their plants, a wide range of differing types of autonomous mobile robots are seamlessly working alongside human employees, and they’re using some pretty advanced kit to do it. Self-learning technology and sensors allow them to map their surroundings using infrastructure-free navigation, obstacle avoidance, and dynamic pathfinding - meaning that they can transport raw materials or pick orders quickly, efficiently, and above all, safely. This article will explore the uses of self-driving vehicles in smart factories. 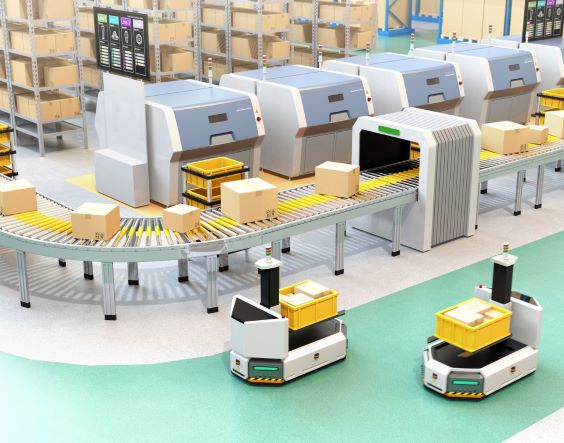 While the idea that your next vehicle purchase could very well be one that you yourself will never actually drive is still a relatively novel one, autonomous industrial robots have been used, in some capacity, since the turn of the century. As early as 2005, industrial robots have been relied upon to transport loads upwards of 1,200 pounds from point A to point B quite literally on their own.

While the technology that guided these trailblazing robotics is a far cry from what is available today (early iterations on autonomous industrial transport were designed to follow a magnetic tape that was adhered to the floor along the desired route) they nonetheless hinted at the true potential these robots might have on the industry.

Improvements were introduced swiftly. In 2006, automatic trailer loading (ATL) technology was made available. This technology allowed manufacturers to load pallets of cargo onto a waiting trailer in a fraction of the time it would take human workers to do it (to give a bit of context, a worker loading a trailer using a forklift might take anywhere from 30 to 45 minutes to fill the trailer. Modern ATL solutions can accomplish the same task in less than five minutes). In an age where supply chain logistics are tied heavily to Just In Time (JIT) delivery, the quicker that trucks can be loaded and be back on the road, the better.

Just one more year later, in 2007, the first automatic guided vehicles (AGVs) began to make their appearance in factories. There are a number of AGVs that specialize in several different functions (for example, there are forklift AGVs and towing AGVs, etc.) but they’re all controlled by a combination of software and system-based guidance systems and can utilize cameras, lasers, or magnets to navigate safely. From 2007 to 2011, AGVs became more easily reprogrammable due in part to improvements in onboard navigation technology. Mapping capabilities in particular meant that technicians didn’t have to re-apply any new cabling, mag strips, or reflectors to accommodate a new route, nor did they have to move fixtures to accommodate the mobile robots. Understandably, ATLs and AGVs undeniably contributed to what made robotics programs so appealing to young technology enthusiasts.

To anyone following the developments of Industry 4.0, automation and machine learning and data gathering are three of the main driving forces behind this industrial revolution. Advancements in the ability to capture and extrapolate metrics from raw data and the ability for equipment to learn new and more efficient ways to complete a given task will continue to push the boundaries of what is possible for self-driving industrial robots. As such, the role of self-driving autonomous robots in smart factories will continue to be in a constant state of evolution.

It stands to reason then, that a “one-size fits all” self-driving vehicle is not a practical solution. Customization is therefore of significant importance. For example, in some operations, it might make sense for a mobile robot to travel from point A to point B and back again along the same unchanging path. Of course, in some operations, the lack of customization would significantly reduce the effectiveness of owning a self-driving vehicle.  For that reason, some of the robots available today allow the user to set up certain rules for the robot to follow. For example, perhaps the route from point A to point B necessitates that travel is one way, requiring the user to input an alternate path to the original position. Perhaps the robot is to avoid certain zones at certain times of day when human traffic or other devices will impede the robot. Speed limits can be configured for certain areas where human workers may have limited visibility of moving equipment or in areas that are particularly loud.

As amazing as these transporters sound, self-driving industrial robots are being programmed for more than hauling material and goods around a shop floor. These robots can be used to monitor inventory, determine the availability and location of specific assets like tools, and identify potential hazards that may have been missed by human workers. The potential of these robots particularly when connected via to other devices and systems via the Internet of Things (IoT) is truly remarkable. Though they may move autonomously, they can be connected to a larger system that collects the kind of plant-wide data that drives innovation and finds efficiencies, ultimately helping to make the manufacturer more profitable. It is easy to see just how much opportunity is out there for those who have taken robotic training courses.

Getting backstory and a bit of a rundown is one thing, it is quite another to see examples of this technology in practice. Here, we’ll take a look at a few examples of companies currently making use of industrial self-driving vehicles.

Amazon would not be the continuously successful platform that it is without its fleet of nearly 50,000 Kiva robots. These self-driving robots are vital to completing tasks like moving inventory and picking customer orders. Amazon, however, isn’t content with operating land-based autonomous vehicles; they have been working to develop and deploy drones capable of delivering small packages right to a customer’s home directly from the fulfillment center. Not only is this an exciting prospect for even faster home delivery, but it will also mean far less congestion on streets and in city centers, and less pollution.

Caterpillar, like Amazon, already uses autonomous robots in their manufacturing processes, but it also uses them out in the real world. The construction giant now owns the largest fleet of autonomous hauling vehicles that have hauled more than 2 billion metric tons in the last few years alone.

Self-driving vehicles are poised to dramatically change the industrial manufacturing landscape. If the current adoption of self-driving vehicles is any indication, we certainly have an exciting future to look forward to. To learn more, check out the robotics online course that George Brown College has to offer.