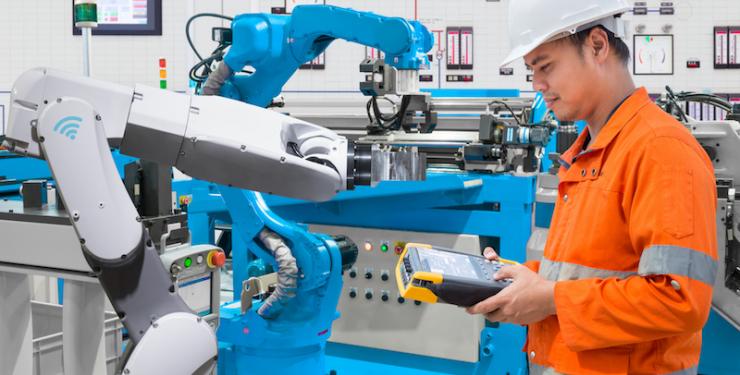 If you’re interested in getting started in the field of robotics, then chances are you’ve heard about robotic control systems. Control systems have a rich and fascinating history and have allowed robotics to become ubiquitous in today’s society.

The first ever industrial robot used in the United States was called Unimate, and was used in the General Motors Plants in 1961. It was used to move die castings from an assembly line and weld the parts on auto bodies. Robots continued to be implemented into plants throughout the 70s and 80s, usually used as manipulator arms or for simple tasks. The barriers that many people faced with robotics expansion were high costs, lack of good sensors, and a lack of understanding of robotics dynamics.

Two factors were responsible for the advancement of robotic control systems. The first factor was a community of like-minded individuals formed which focused on the “increasing fundamental understanding of dynamics, architecture, and system-level design.” The second factor was Moore’s Law, which dictates that “we can expect the speed and capability of our computers to increase every couple of years, and we will pay less for them.” (source)

Robot manipulators became a “standard” control application beginning in the mid-80s and helped move manufacturing plants forward, bringing in streamlined applications and more efficient processes. Robot manipulators are electronically controlled mechanisms that are made up of multiple segments, and are commonly referred to as “arms.” One of the most famous examples of these manipulators would be the Canadarm, which deployed and repaired satellites for 30 years with NASA’s Space Shuttle Program.

In addition to robot manipulators, another way that robotic control systems evolved was with the advent of teleoperation, which allowed robotic manipulators to be controlled by remotely located humans. The Canadarm is another example of this, but it’s also an important part of military operations and the field of healthcare. With teleoperation, surgeons can perform operations on patients without being in the room, allowing specialized surgeries to take place without the need for travel.

To understand the robotic control system, first we need to understand the technologies used in robotics. The output produced by a robotic system is known as a “state.” The state depends on its previous states, stimulus (signals) applied to the actuators, and the physics of the environment. The state can be anything including speed, velocity, angular velocity, or force. State is indicated by using the letter “x.”

Robots cannot determine the exact state, but they can estimate it using the sensors attached to them. It is the responsibility of the robotic engineer to select good enough sensors or to calibrate the sensors well. The “estimate” plays an important role within this equation, and it’s denoted by “y.”

When we talk about the goal that is wished to be achieved, this is called the “reference.” The “error” is the difference between the reference and the estimate. “Control signal” is the stimulus produced by the controller and is labeled with a “u.” Lastly, how the system will behave under non-static conditions is referred to as the “dynamics.”

It is always the key responsibility of the engineer to build a controller that reacts and produces a control signal such that error ~ 0 and that the state ~ the goal, as seen in the following equation: (u = e~0 & x~r).

Robot control systems regulate and command the functions of the robot in order to achieve the desired result. The robot itself is an autonomous machine that has 3 main parts which all work together in a cohesive manner. The three main parts consist of the controller, the actuator, and the sensors. The controller, which we just discussed, commands all the movements of the robot through a feedback control system run through a computer program.

The actuators create mechanical movements with motors, pistons, wheels, and other such devices so that the robot can turn, grab, and lift. Sensors give the robot environmental awareness and are an integral part of how the robot relates to its surroundings. With sensors, the robot is fed information about the size of different objects, shapes, and direction.

There are multiple different types of methods that are used to control robots, but PID (Proportional-Integral-Derivative) control systems are the most common method. It applies an accurate and responsive correction to a control function, with cruise control being the best example. As the application of robotics increases, the demand for more efficient controllers is needed, which is why PID is so popular. Control Using LQR (Linear Quadratic Regulator) is another well-known method that provides “optimally controlled feedback gains to enable the closed-loop stable and high performance design of systems” (source). RFID, or Radio Frequency Identification, is also well-known as it’s commonly used to enable access to control systems wirelessly.

There are also open loop and closed loop systems that must be taken into account. An open loop system means that the control activity is unaffected by the yield. The best example of this would be an electric clothes dryer. Depending on how many clothes you have or how wet they are, you can choose different settings and then set a timer. However, the dryer will not regulate the process, meaning that it will stop once the timer goes off whether the clothes are fully dry or not. It’s an open loop system because it does not monitor or measure the progress.

A closed loop system is when there is feedback, meaning an error signal is fed to the controller in order to reduce the error and stabilize the output of the system by bringing it to a desired value. You can turn an open loop system into a closed loop system by adding a sensor that monitors the progress of whatever activity of the task.

If you want to expand your knowledge with regards to robotic control systems, then check out the Robotics Technician certificate that George Brown College has to offer.