Modern robots perhaps aren’t what we envisioned they would be fifty, thirty, or even ten years ago. Robotic butlers don’t greet our guests, prepare our meals, or drive us to and from work (yet). Despite this, robots have had a substantial and undeniable impact on each and every one of our lives. Up to this point, robots have been used to great success in the manufacturing sector, where they’ve been able to drastically increase output and reliability while reducing costs. Naturally, a portion of the human workforce has grown wary of the encroachment of automation but truth be told, robots have only been used to supplant human workers in some of the more dangerous or repetitive tasks. Now, there are already instances of robots and humans working side by side in a more collaborative way. 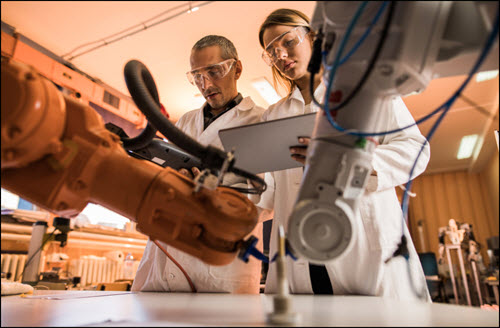 If you manage a sports team, you tend to put players in the positions for which they’re best suited. The same goes for a team that is comprised of both robotic and human workers. Robots today are best suited for lifting heavy payloads, performing operations in hazardous environments, and processing vast quantities of information. Humans on the other hand, excel at adaptability and coming up with creative solutions to problems as they arise. By keeping this manner of division of labour, workers anticipating being replaced by autonomous workers can breathe a little easier knowing that there is still a role they can fill.

Continuing with the team analogy, successful teammates are able to support one another, anticipate the actions of other players, and understand how their role impacts the team as a whole. Robots used in a human/robot workforce need to be able to anticipate the needs of their human counterparts and to provide assistance when needed. This level of AI comprehension can have a remarkable influence on the efficiency of production since each member of the team is working dependently, not independently.

Even when direct communication isn’t possible, a good team can still succeed because each member understands the goal. Counterintuitive as this may sound, the common thread between members of a team is not sewn simply because each possesses the same information, but rather from the experience of working together. Though some believe that robots simply can’t build shared experiences with humans, many posit that machine learning will be the key to helping robotic workers develop expectations for their human co-workers. The ability to develop this type of understanding will allow both robot and human to learn of the other’s capabilities and limitations.

Even between two living, breathing workers, communication is not without its flaws. Communication between a human and a robot is fraught with many more hurdles that need to be overcome. Hurdles such as understanding the appropriate responses to questions, or how to word the questions themselves. Perhaps the best form of communication between robots and humans needn’t contain words at all; dogs and humans are able to communicate just fine without the use of words. Visual and auditory signals may consist of the most idyllic means of communicating with an artificial intelligence.

It goes without saying that if there is a lack of trust between team members, the team (or in this case, the products being produced) will suffer. Technology that behaves in an unreliable manner will almost universally cause the technology to be rejected. It’s important that any fluctuations in the levels of reliability be disseminated and explained to the user; only then can faith in the technology be restored and the partnership resume.

There is no avoiding the fact that some human jobs will fall victim to automation, but it’s important to remember that there will be a place for the human capacity to think on their feet when things go awry—a quality not soon to be replicated by machines. As automation processes continue to evolve and disrupt many of the world’s industries, there will be a commensurate increase in the number of human and robotic teams working collaboratively, side by side.