How are Industrial Robots Taught to Perform Tasks?

How much really goes into programming an industrial robot? Surely not as much as one might expect; after all, industrial robots are charged with the seemingly easy task of repeating a limited range of motions over and over again, right?

The truth is, programming a robot to function as intended requires far more than a few lines of code. As robots become more and more complex, being able to perform processes comprised of many precise, individual tasks, the amount of work and expertise that goes into training these artificial manufacturers is on the rise. Let’s take a look at a few of the ways in which the modern robot is programmed. 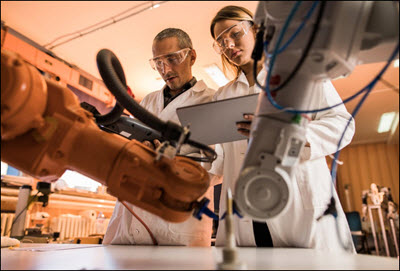 Industrial robots are not what one might envision when picturing what a robot should look like. In many industries, the term robot represents a robotic arm that’s guided by a standard set of movement principles. Conventional wisdom suggests that each variation of these movements needs to be meticulously programmed into a computer, line by line; but that couldn’t be further from the truth.

The teach pendant, for example, a sophisticated handheld device, allows the robot to be controlled in real time and allows the operator to input logic commands such as wait, go, if, etc. and record the information into the robot’s computer.

Of course, the speed of each motion also needs to be considered so that the robot can perform joint moves as often as possible. These moves are more efficient from a movement perspective, assuming a programmer has the experienced to implement. Indeed, this type of programming may appear simple for one looking in on the process, but in fact, it can take years to master. 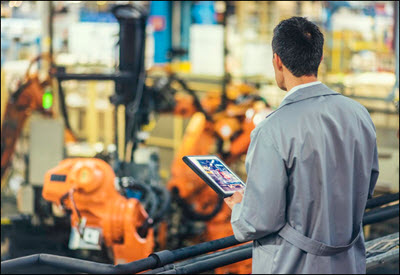 Even a non-programer can understand the potential benefit of offline robotic programming. For starters, there are no risks in terms of equipment downtime or safety to the technician, who can program the robot from the comfort of their desk. There are many different type of programs that offer offline simulation capabilities, but the principle is the same; creating a virtual environment representative of the manufacturing process and programming the movements using a sophisticated 3D model.

It should be noted that no program is outright better than any of the others, but one may be preferable depending on the complexity of the application. The appealing thing about this type of programming is that it allows the programmer to not only program robotic movements, it also allows the programmer to implement and view the outcomes of collision and near-miss detection functionality, and record cycle times.

Since the program is created independently of the device on an external computer (and not manually, as is the case for teach pendant learning), it allows manufacturers to capitalize on short run production by being able to quickly automate a process without impeding normal operations. 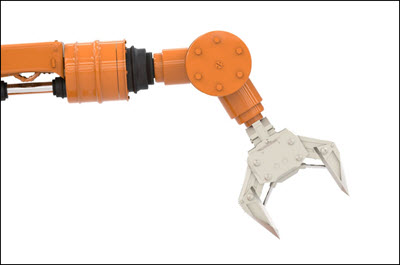 A supplement to teaching pendant learning, teaching by demonstration is worth noting because of its ability to teach a robot movements with a high degree of precision. As with a teaching pendant device, the operator is able to manipulate the robot into the desired position and store this information into the robot’s computer. Having said that, there are a few additional benefits of this method:

The Future: Robot See, Robot Do?

As good and efficient as these programming methods are, they can impede the process time and increase the cost of production; no matter the method selected, time will be needed to teach the robot how to perform the task. It goes without saying that if the robot need only see the task being performed in order to replicate it, the cost and time associated with programming industrial robotics would decrease tremendously.

Though this may seem like far flung science fiction, this type of robot training is currently being examined. The way it works is simple -- have an expert “show” the robot how to perform a particular task and allow the robot to think for itself in determining the sequence of motions it needs to replicate to complete the task. The idea is that as the robot works through the task over and over again, it will be able to find ways to improve the way in which the task is performed.

The tasks we assign robots to complete will only get more complex as time goes on. That said, the methods that we currently use to program these robots will be forced to evolve.While contemporary programming activities perform admirably, there is little doubt that artificial intelligence will play an important role in the manner in which robots learn.

Interested in programming robots yourself? Learn more about our online courses in robotics.