Why DARPA is Teaching Robots to Fall Down 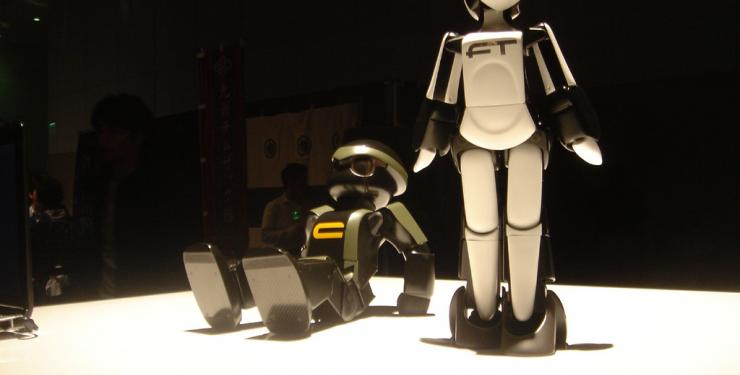 When you think about all the complicated and dangerous tasks society could be using robots for in the not too distant future, what comes to mind? Will robots be used to pioneer deep space exploration to spare the fragile human body from the dangers of a frozen, irradiated void? Will robots replace human workers for things like search and rescue, fighting fires, or operating the oil platforms located in the middle of Earth’s most tumultuous seas?

The answer to these questions resides firmly in the realm of the possible, especially if you consider technology’s exponential growth over the last 25 years. Technological advancements have shown time and again that nothing that can take shape in a fertile mind is ever far from becoming a reality.

With that thought of unlimited potential in mind, it might surprise many readers to learn that DARPA (Defense Advanced Research Projects Agency) – the arm of the U.S. Department of Defense whose mandate is to develop cutting edge military technology – is investing considerable funds to create an algorithm designed to help robots fall with “grace”

That’s correct. DARPA wants to teach robots how to fall. Admittedly, such a project doesn’t really scream excitement when you take into account there are already robots in existence capable of building other robots and robots that can work together to build structures. Given all the really useful things that robots can be programmed to do, is teaching a robot how to “fall down” really the best use of public funds?

The answer, surprisingly, is absolutely.

The Importance of Robots That Can Take a Fall

When you think about all the dangerous tasks listed at the top of the page, consider for a moment what would happen if a robot fell while performing its duties, damaging itself to the point of no longer being able to function. Who would trust a fleet of mechanical workers that couldn’t correct such a simple and common situation? Such a relatively simple problem would pose a significant barrier for any organization looking to substitute a portion of their workforce with bots.

To further drive the point home, imagine if you will NASA having to put the space program on hold because a droid sent to prospect minerals on Mars fell over and couldn’t regain its footing. Think of all that would go undiscovered, all that would be lost. Granted, that last example is probably highlighting the problem on perhaps the grandest scale, but the point is, if society begins to replace humans with robots, one must acknowledge that eventually, robots will fall – and they need to be able to do so in such a way as to remain functional.

Logically speaking, one could say that taking the time to program a robot that is able to fall in such a way as to avoid serious damage is actually one of the most important pieces of programming (aside from their primary function) that a robotics technician can bestow upon a robot.

For someone that doesn’t know a great deal about what actually goes into building a working robot, considering all the nuances and scenarios that must be conceived by the individual designing and building it, it’s easy for anyone to develop a newfound respect and appreciation for those working in the tech sector. After all, how many people can honestly say that they’ve thought about the mechanics involved in keeping their body upright, or given pause to consider the dozens of muscles required to stabilize the human body as it climbs stairs or navigates around an obstacle. To think that technology has progressed to the point where teaching entire disciplines can be done from any place in the world though an online technology course; a course that could teach the skills necessary to one day program the fluidity of the human body into one made of metal is truly amazing.

There is little doubt that robots will allow humanity to accomplish all manner of things that today are considered impossible. Robots, by taking over our most dangerous professions will help to eliminate workplace injury and in so doing, improve the quality of life for millions. If all that begins with DARPA spending millions of tax dollars to create a program that will help robots fall down, so be it.