What Does The Future Hold For Industrial Robotics?

Advancements in technology are largely an iterative process, whereby design teams build upon last year’s breakthroughs to improve a product’s functionality, efficiency, and/or to lower its cost of production. The field of robotics is no exception; today’s robots are faster, more dexterous, are cheaper to produce, and work more collaboratively and intuitively with human operators than those built ten or even 5 years ago. It is therefore really no surprise that industrial manufacturers are pivoting towards having a more significant robotic presence on the factory floor. Given the seemingly limitless upside that comes with investing in industrial robotics, it stands to reason that the resulting shift away from an exclusively human workforce in favour of one that is supplemented by robotics will continue for some time to come. In this article, we’ll take a closer look at the future of robotics in manufacturing. 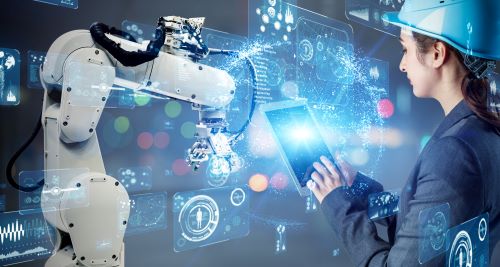 The Evolution of Robotics

“If you don’t know where you’ve come from, you don’t know where you’re going.” Surely, the late American poet Maya Angelou was not thinking about industrial robotics when she coined this famous turn of phrase, but the essence of the statement still rings true; we cannot begin to understand how far industrial robotics has come, and therefore how far the field can go, if we don’t have a firm grasp on the origin of the technology.

The idea of having a robotic assistant or device close at hand to help serve or complete tasks is itself one that is centuries old, but it wasn’t until 1959 when the Unimate #001 prototype, a 2,700-pound metal arm attached to a steel drum, first began working alongside humans on the floor of a General Motors diecasting factory in Trenton, New Jersey. In less than five years, the Unimate 1900 series held the distinction of being the first mass-produced piece of factory automation equipment with a commendable 450 Unimate robotic arms in use. Five years between the prototype stage and mass production may seem like a long time to some, but it’s important to remember that industrial robotics wasn’t always the “easy sell” it is today. A fledgling technology may take time to gain tracking, but when it does, the results are indisputable.

Twenty years after the Unimate’s patent was granted, the 1980’s ushered in an era of mass-production for a variety of robotic equipment with new solutions being brought to market on a monthly basis. In those early years, most of the industrial robots were tasked with relatively simple tasks like the handling and transportation of goods. Of course, industrial robots are now used to complete very complex tasks with a great deal of precision and, in many cases, work collaboratively alongside human workers in smart factories around the world.

While many have long awaited the “Robotic Revolution” (a period marked by unsurpassed productivity and a seamless mass integration of robotics into all manufacturing sectors), some have been wary of the encroachment of industrial robotics on human jobs. After years of significant advancements in the technology, it is difficult to argue that we are not already well within this transformative period.

Research that was published by Gartner, one of the world’s leading research and advisory companies, has posited that nearly 35% of jobs will be automated by 2025, either through the use of robotics or advanced computer software. One study on its own is not necessarily an indisputable indicator, but there are others whose outcomes seem to reinforce Gartner’s findings. In one such report published by the International Data Corporation, a key finding predicted that the robotics market growth will approach nearly 20% over the next three years.  In many respects, the growth of the industrial robotics market is an indicator of the changes we can expect in the manufacturing sector; greater investment in robotics indicates a deeper integration of industrial robotics into the manufacturing process.

Having said all that, it’s often been argued that robotics will not have the displacement effect on human workers that employees fear. Many of the industrial robots in use today have been designed to work collaboratively alongside humans to varying degrees. Though the robotic equipment itself is tasked with performing much of the repetitive work (at a rate that a human worker could not come close to matching), the human operator monitors the robot and performs ancillary tasks. Rather than cutting humans out of the equation entirely, the approach has been to integrate collaborative robots (or, “cobots”) into the manufacturing process while still leveraging the adaptability and experience of human workers. Collaborative robots have been such an industry focus that, in 2013, the first safety standards for collaborative robots were published – meaning there are industry-recognized standards that define the safety and performance of a cobot. To the outsider looking in, this step may not look like much, but to the prospective student considering robotic training courses it’s a sign that the industry will continue to provide ample opportunity for workers along the entirety of the employment spectrum.

You don’t have to be an economist to recognize that as the applications associated with robotic and automation technology grows, so too will the demand for such solutions in the manufacturing sector. Market growth and technological advancements both show no imminent signs of slowing down; in fact, the opposite appears to be true.

In particular, artificial intelligence (AI) is among the technologies that shows some of the greatest potential in the field of robotics and automation. Though AI has many, many real-world applications beyond the scope of industrial manufacturing, machine learning (a subset of artificial intelligence) can be used to find efficiencies in processes used on the factory floor to reduce costs and improve the quality and/or output volume – three things that contribute heavily to a business’ profitability.

Advancements in robotic hardware often gets most of the limelight, but much of what drives robotic innovation is the software programming. A piece of industrial robotic equipment is only as good as the programming that brings it to life. Engineers and developers are constantly looking for ways to improve software design and as long as the physical equipment continues to be iterated upon into newer and better versions, you can bet there will be an equal amount of attention being given to its software. From a preventative maintenance perspective, cutting edge software is vital for monitoring system maintenance requirements. Since downtime in a factory is a very costly thing to occur, software that collects and disseminates comprehensive performance data is a very sound investment.

While the above may not represent even a fraction of the advancements within the industrial robotics industry, they do represent what is driving the market demand for the technology. In the third quarter of 2019, global purchase orders for robotics were valued at a staggering $1.3 billion. By 2024, some estimate the annual global purchase orders will exceed $40 billion.

Robots are becoming more intelligent and versatile and industries will undoubtedly have to adapt to the changing automation landscape. With the Robotics Revolution in full swing, automation technology will only continue to grow and along with it human-robot collaboration and industry demand. If you’re interested in online robotics training courses, be sure to explore what George Brown College has to offer.