A Robotics Education Strategy is Key to Boosting Manufacturing Sector 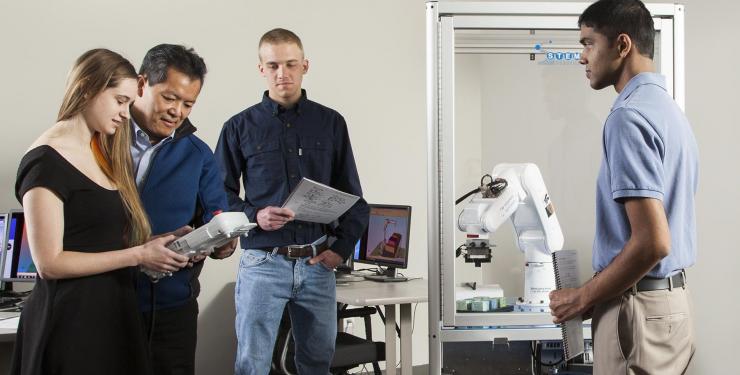 Developing a curriculum that places heavy emphasis on robotic technology can no longer be considered just another niche educational supplement designed to promote an interest in STEM subjects in today’s youth. Increasingly, such programs are being recognized as playing a vital role in providing the workforce of tomorrow with the skills necessary to thrive in an evolving, in-demand sector.

Employment Rates in North America: Are Better Times Ahead?

In recent years, the unemployment rates in North America have certainly left room for improvement. Since 1990, unemployment rates in the United States and Canada peaked at around 10% and 13% respectively, figures which, to someone who doesn’t have an economic background, may hold little value. For the layperson, it’s enough to know that all things considered, unemployment rates are intrinsically tied to the health of the economy. And while 10 and 13% may sound like an acceptable number of individuals to be out of work, this under utilization of human capital in two of the world’s dominant economies not only translates into billions of dollars in lost revenue, it also translates to billions of dollars in increased social program spending.

Though there are a number of complex factors that can be attributed to a nation’s unemployment, one that has played a significant role in North America is the gradual decline in the manufacturing sector in the waning decades of the twentieth century.

Much cheaper labour costs abroad understandably forced the hand of many domestic manufacturers, leaving them with no other recourse but to relocate operations to another country in order to remain competitive. Obviously, this left a void in the domestic job market.

It seems that this decades-long manufacturing exodus may finally be about to end; as more and more manufacturers embrace automation and robotic technology in their facilities, the demand for skilled labour has been on the rise, resulting in a homecoming of sorts for plant operations.

Robots Are Not Replacing Human Labour

In spite of what many people think, robotic technology isn’t eliminating the need for a human workforce. What it is doing however is transforming the labour market to one where robots do all the heavy lifting and manual labour, leaving (human) robotic technicians to develop and maintain the complex systems that drive them.

What is a “Robotic Education Strategy”?

A robotic education strategy is one that aligns STEM education with certification and training in skills that are in demand by the industry. Admittedly, such a strategy is one that requires constant evaluation to ensure that it remains relevant as it aims to fill the skilled labour gap. Though theory based learning is important, hands-on training is vital to the success of the student. George Brown College offers several online technology courses that use training software that is comparable to what is found in the industry. GBC’s PLC programmer certificate program for example uses software that closely mimics a widely used series of PLCs, allowing the student to develop their proficiency in writing, testing, and de-bugging programs.

Quite often, the larger robotic education strategy starts much earlier than at the post secondary level. For example, there are many after school programs that parents can enrol their children into that will help them develop an interest in robotics and STEM as a whole through the use of games and other small projects typically involving coding or the building small robotic devices. Examining both from afar, it might be difficult to see how they both aim to serve the same purpose. Upon closer inspection however, it’s easy to see how programs focused on the development of in-demand skills like those offered by George Brown College benefit greatly from those that get young students excited about technology

For those currently working in the manufacturing sector, it’s easy to understand that they might be feeling as though they are being forced out of their jobs – but those that develop continuing adult education programs are equally beneficial to those that have years of practical experience under their belts and are just looking to expand their abilities.