How Robotics Can Be Used To Reduce Our Carbon Footprint

Robotic technology combined with artificial intelligence (AI)-powered applications are working together to help policymakers, manufacturers, and key industry stakeholders manage and even reduce their carbon footprints. In fact, according to PwC and Microsoft, AI is projected to reduce global greenhouse gas emissions by four per cent in 2030, which is equivalent to 2.4 gigatons of carbon dioxide emissions. 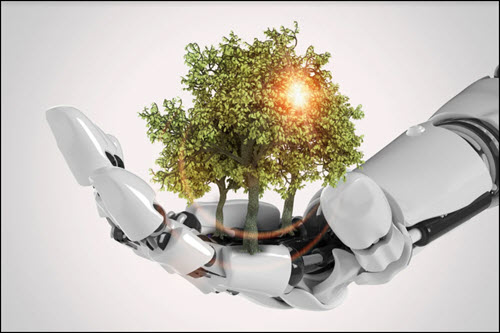 Undoubtedly, the field of robotics is already transforming the manufacturing sector in other ways, by taking on the tasks that are too arduous or dangerous for human workers to perform, as well as those that require a high level of consistent precision to complete. Operating in a world that is constantly threatened by severe climate change and increasing greenhouse gas emissions, key stakeholders must now leverage this technology to mitigate these damaging effects and ensure the viability of their industry going forward.

Below are just a few of the ways robotics are being leveraged to reduce the proverbial carbon footprint across industries.

Since robots have yet to populate outer space in any great number, perhaps the most prolific example of robots completing tasks in environments in-conducive to human life are those that have been deployed to the depths of the world’s oceans. There, robots that are specifically designed to withstand the enormous pressures and frigid temperatures of the ocean’s depths collect samples and clean up the microplastics found on the seafloor. Microplastics are small pieces of plastic, generally measuring five milimetres across. They have a number of commercial applications from facial scrubs to air blasting technology, but they can also result from larger pieces of plastic breaking down in the environment - and they are littering the ocean. In fact, more  microplastics have been discovered hundreds of metres down than in the Great Pacific Garbage Patch, the world’s largest accumulation of ocean plastic (for inquiring minds, this mass of plastic is estimated to take up an area twice the size as the state of Texas). More startling has been the discovery of these microplastics within the fish and other animals sampled as part of the study, suggesting that the plastics have become a part of the food chain.

The study’s researchers used underwater robots equipped with sampling devices to filter plastic particles out of the seawater in two different locations at various depths in Monterey Bay. The researchers have another study planned to make use of the robots to collect more information in other deep-water locations.

These findings would not have been possible without the robots, as it would have been significantly more difficult and expensive to send humans to the same depths. Uncovering these findings ensure proper policies can be put in place to mitigate the effects of microplastics and clean them up from our oceans.

While you might not need any more convincing that microplastics should be removed from the ocean, you might still be wondering how does microplastic contribute to the rise of greenhouse gases and more importantly, how can robots help to counter that increase? First, microplastic has become so pervasive in the world’s oceans that it is wreaking havoc up and down the food chain. When it comes to climate change, the bottom of the food chain is the link that requires the most attention. You see, 25% of all carbon dioxide produced by humans ends up in the ocean. This vast amount of carbon dioxide can actually alter the chemical composition of the water, making it more acidic and decimating stocks. Fortunately, some algae are able to store carbon dioxide (in a similar manner to trees) but algae isn’t able to break down microplastics.

Zooplankton, the microscopic organisms that help to sustain ocean life have begun to eat plastic and while that might sound like good news, the chemicals and toxins that are present within the microplastics permeate throughout the food chain. Using robots to source the ocean floor for plastics will not only help to protect marine life, but they will also greatly reduce the amount of greenhouse gases the ocean must absorb.

On a smaller, consumer level, robots have been designed to perform daily household chores, such as mowing the lawn, cleaning pools and grills, saving the average consumer time and energy. You might not think it, but yard maintenance equipment contributes significantly to a household’s carbon footprint. According to the Environmental Protection Agency (EPA) a snowblower produces approximately one pound of carbon monoxide for every one hour of run time. That is equivalent to driving a car close to 113km (70 miles). The EPA also estimates that lawn mowers produce 11 times more pollution that a new car does to the tune of 13 billion pounds a year. Add gas powered leaf blowers and weed whackers to the mix and the amount of pollutants produce each year becomes staggering. Electric powered AI controlled mowers - and more recently - snow blowers can significantly reduce the volume of air pollution expelled each year.

It’s no secret that robots can often perform the same tasks as their human counterparts with higher efficiency. This does not, however, necessarily spell a displacement of human employees, rather, robots can be used to make humans and workplaces more efficient, and greener.

When robots replace manual labor, the overall productivity increases dramatically due to the high level of precision and quality. However, ingenuity and innovation are still human traits that are necessary to help businesses and manufacturers thrive. A report from the McKinsey Global Institute suggests that rather than completely disappearing, many jobs across industries will simply involve new forms of cooperation between man and machine. Using robots to perform mundane, routine tasks 24/7 guarantees the same result every time, which is not possible with human workers. By using robots to replace these tedious tasks, employees can focus on social interactions, management and applying their expertise within the workplace.

Moreover, many of the industrial robots that are replacing aging equipment are more compact and are more efficient in terms of the amount of energy that is required to operate them. The result of course, is fewer pollutants expelled into the air and a healthier bottom line for the manufacturer.

Simple changes can also be made on the factory floor to reduce a company’s carbon footprint. For example, rather than using a gas-powered forklift to pick orders and load trucks, electric-powered picker robots can autonomously perform roughly the same task without all of the noxious fumes. Fleets of electric vehicles are already hitting the streets to deliver goods to home and businesses further reducing airborne pollutants.

Robots That Literally Make the World a Greener Place

Massive tree planting efforts have been gaining popularity in recent years (The Nature Conservatory’s Billion Tree Project being just one of them), and while these communal efforts inspire hope for the future, organizing an army of volunteers around the globe is no easy feat. Not only that, remote areas that could benefit from a tree planting program are often overlooked because they are simply too difficult for human tree planters to access. A fleet of seed spraying drones can spray seeds from the sky thereby maximizing the area covered in a given amount of time. A handful of technicians and drone operators could complete the same amount of work as thousands of volunteers.

Given that robots are increasingly tasked with completing many tedious and menial tasks within the workplace, they are also able to remove and mitigate human error commonly associated with these tasks. Removing the threat of this error and subsequent clean-up inevitably saves companies and manufacturers time and money. It also saves on manufacturing waste and resources, reducing the company’s carbon footprint.

It’s important to note, however, that robots are not free from error. While they may not be plagued by human bias and misconceptions, they must be programmed and installed by humans who are susceptible to making mistakes during any phase of the implementation process. However, any robotic errors a manufacturer or business may experience are likely predictable, because they are systematic and modeled, unlike that of humans. Thus, key stakeholders will be able to mitigate and address these errors more quickly and efficiently than human errors, eliminating wasted resources.

Undoubtedly, the proliferation and implementation of robotic technology will help companies and manufacturers across industries reduce their carbon footprints through increased efficiency, mitigation of error and leveraging robots to perform tasks humans could not otherwise do. An increasing number of companies will continue to use robotic technology to ensure the longevity of their business, which spells the growth of the robotic technician job market. Robotics technicians will play an integral role in the implementation and maintenance of these robots and will spearhead the campaigns to reduce their company’s carbon footprint. To kickstart or supplement your exciting career as a robotics technician, get in touch with our Program Consultant by email, or by phone toll-free at 1-888-553-5333.