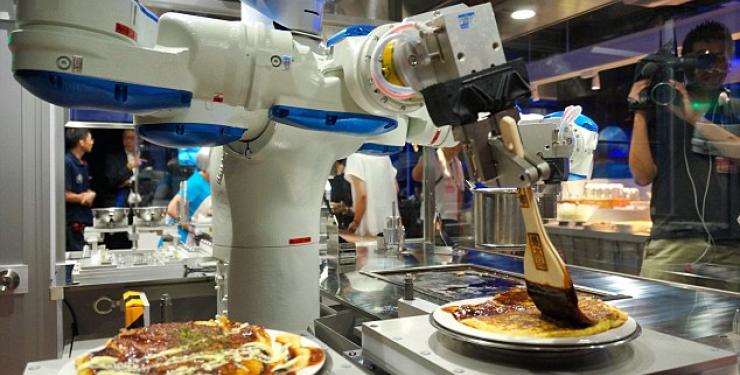 Robots are continuing their unstoppable march into previously unheard-of sectors. Why should the restaurant industry be any exception?

A completely automated kitchen might sound like something straight out of science fiction, but it’s actually closer to reality than you might think. Last July, the German-developed BratWurst Bot served, cooked, and took orders for over 200 meals to guests at a garden party, many of whom were surprised to learn that robots were capable of such tasks.

Many companies have foreseen and forewarned us about the use of robotic “employees” in restaurants over the past decade. Momentum Machines, located in Silicon Valley, is a group of engineers and food enthusiasts with decades of restaurant and robotics experience. They specialize in an entirely automated system that can cook and prepare just under 400 burgers each hour. The Spyce Kitchen, developed by MIT students, is a system that is focused on serving and mixing ingredients for complex meals. Both these systems are fully automated and operate almost entirely independently of humans.

Moley Robotics has developed the Robotic Kitchen, which uses tactile intelligence and two humanoid arms to reproduce a chef’s motions, recorded as he prepares a meal. At the Silicon Valley-based startup Zume Pizza, humans work in conjunction with two automated counterparts: “Marta” and “Bruno.” Marta spreads sauce on a pizza in just two seconds, and Bruno takes pies from the human employees and places them in ovens.

This technology isn’t just limited to Silicon Valley pizza joints either; restaurants all over have been looking into and investing in technological replacements for human workers. But even though the technology is there, it’s still not clear exactly when this futuristic world will come to pass. There are still plenty of problems that need to be overcome.

Robotics approaches can take one of two main forms for the restaurant industry, based on a restaurant’s service style. Most of the food-making robots thus far have mainly operated in a lab, creating food on an industrial scale in a very standardized way, like one would see at a McDonald’s.

One example of this “industrial style” can be seen in Spyce Kitchen’s streamlined way of operating. First it is given customer’s orders and then it deposits the necessary ingredients into a container, where the final product is mixed and cooked before being deposited onto the customer’s plate. Likewise, the robot developed by Momentum Machines slices, cooks, wraps, and serves customer’s burgers at an average rate of one every 10 seconds.

The BratWurst Bot operates in a more humanoid way, able to use an arm and set of tongs while it receives orders, grills bratwursts, and serves them, all simultaneously. It does this using two cameras and a special algorithm to detect bratwursts on the plates and grill, while also keeping track of any colour changes in the cooking sausages to decide if they are done or if they need to be turned.

One barrier that still has yet to be overturned by the technology of automation is the preparation of ingredients. This is one area where humans may still be required to assist their robotic fellow workers.

Fruits and vegetables present a certain random element that has proven to be a large technological roadblock. Since they can vary so much in size and shape, apples and cucumbers can present a real challenge to a robot trying to prepare them. Slicing a watermelon is also very different than slicing a head of lettuce in terms of pressure and area, and this can make things hard for a robot trying to make a watermelon salad, for example.

This lack of dexterity is a problem, and a barrier to the complete robotic takeover of restaurant kitchens. Another is price. The Robotic Kitchen, for example, costs $75,000, but the creators at Moley Robotics hope that the cost will go down in the coming years, as it has with other technological game-changers like the iPhone, the Tesla, or the microwave oven.

And the more the cost of such systems goes down, the more attractive this technology becomes to restaurant owners and food company executives. As the Fight for $15 rages on, more and more companies are looking into automation as an alternative to human workers. For example, Andy Puzder, the CEO of the company that owns Carl’s Jr. and Hardee’s, and Ed Rensi, the former CEO of McDonald’s USA, have both expressed interest publicly in the cost-saving capabilities of automation. Chains such as Taco Bell, McDonald’s, and Starbucks are already replacing cashiers with interactive touchscreens that take customers’ orders in some locations.

In higher-end restaurants, chefs could work alongside robotic assistants that do things like chop carrots while the chef is busy with other more complex tasks.

With the population of robots growing, the need for Robotics Technicians to maintain their circuits and motors can only grow. The online technology programs that make up the robotics program at George Brown College can help prepare students to get jobs in this brave new automated world, in the restaurant industry and beyond.

The college offers a Certificate of Completion and, whether you want to become a PLC programmer or an Robotics Technician, it’s a great way to improve your skills and position yourself in the new marketplace.