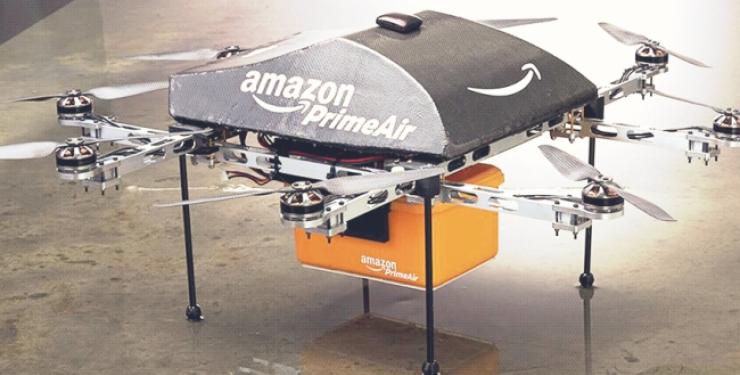 In 2013, Amazon made headlines by announcing their plan for a drone delivery system. Although seemingly an amazing advance, the truth is that drone technology has come on in leaps and bounds over the last decade or so, and it was only a matter of time before someone decided to deploy them commercially. It’s a logical step: Amazon wants to stay ahead of the game and ensure that its reputation for fast, secure delivery isn’t compromised or overtaken by its competitors. Why not do something that nobody else was even thinking of? But it’s been a long road so far, and US federal aviation regulations have so far hampered the company’s efforts to get their system off the ground.

Amazon’s Prime Air drone system is simple in theory. Packages up to 5 lb will be delivered in 30 minutes or less using a small fleet of drones flying under 400 feet. The vehicles will take advantage of sophisticated ‘sense and avoid’ technology and a high degree of automation to safely operate beyond line of sight to distances of over 10 miles. Currently the vehicles are being tested in the UK, Israel, and now the US, thanks to the decision by the Federal Aviation Authority to grant Amazon a license to use their technology in US airspace.

It’s taken some time, but it finally looks like Amazon will be able to test its equipment on its home turf. Before the FAA granted permission, the company was forced to test the drone system in Canada, which was useful but not ideal. The permission, which is in line with the FAA’s proposed guidelines around commercial drone flight, includes the drone flying no higher than 400 feet, no faster than 100 mph and remaining in sight of an operator at all times. Amazon will still need to convince the FAA that drones can be safely flown beyond the line of sight, or it will be restricted to delivering packages to people within a few hundred metres of its warehouses.

The plan is to ensure that the company’s small drones are separated from most manned aircraft traffic so as not to interfere with current aviation. However, this might pose problems not for commercial manned passenger craft but for smaller hobbyists, and for helicopter pilots, there may be some issues. Hopefully the drones will be equipped with transponders so that their positions can be detected by other aircraft – or the ‘sense and avoid’ tech that Amazon hopes to deploy does its job well.

The drones themselves will also need to be regularly maintained to ensure that they are fit for the purpose of carrying customers’ goods through the skies. To make this happen, Amazon will either need to hire specialist electronics and robotics technicians, or contract them out from elsewhere. However, the company already has its own fleet of trucks, so it’s likely that it will keep its drone specialists in-house. Regardless of which path the company chooses, such careers are likely to be ever more in demand as other companies jump on the bandwagon with their own drone programs.

How to Make a Drone Delivery

Amazon eventually plans to have many different drone designs that can deliver in different environments. When an order is placed, the correct drone will pick it up from the warehouse using a small yellow bucket and then head out to its destination. As it nears the delivery point, the customer will receive a message telling them that the drone is arriving. Customers will place a landing pad that the drone can detect, and then it will land and release the ordered item, before taking off and returning to the warehouse for the next task. It’s a fast, efficient service that should have the required item to your door, as mentioned above, in just 30 minutes.

Drones are quickly becoming useful in other arenas too, and now there is even a drone racing league, which – as you might expect – pits drones of different designs against one another to see which can complete an airborne course the fastest. It won’t be long before drones are such a normal sight in our skies that articles like this will become as antiquated as those in the 90s discussing the potential of the information superhighway!